How is Decaf Coffee made?

What is decaf coffee?

Over the years, decaf coffee has taken a beating due to a perception of weak flavor or the old rumor that decaf coffee is decaffeinated using formaldehyde. To add insult to injury, the catchy phrase “death before decaf” captures the general public’s negative opinion on what is decaf coffee.

The truth of the matter be told, how decaf coffee is made is quite interesting as it addresses two questions I am frequently asked: Does decaf coffee have caffeine and is decaf coffee bad for you?

Does decaf coffee have caffeine?

The short answer is yes, decaf coffee has caffeine. The USDA regulations stipulate that decaf should not exceed 0.10 percent caffeine on a dry basis in the package. In other words, an average 12-ounce (354-ml) cup of coffee containing 180 mg of caffeine would have about 5.4 mg of caffeine in a decaffeinated state (97% caffeine-free). Hold on, though, because not all decafs are created equal. The caffeine content in decaf coffee depends on the type of bean and the decaffeination process.

How is decaf coffee made?

The process of decaffeinating coffee is accomplished through a solvent, a water process, or a supercritical carbon dioxide process. Let me walk you through each method, and then I’ll tell you which one I prefer in the end. 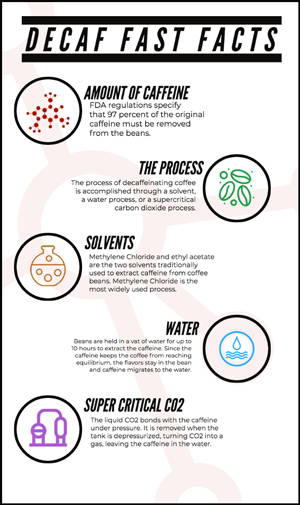 Methylene Chloride and ethyl acetate are the two solvents traditionally used to extract caffeine from coffee beans. Methylene Chloride is the most widely used process. Both processes start by soaking green coffee in hot water so that the solvent can penetrate the coffee bean. They are transported to a vat of solvent where it bonds with caffeine molecules. Then the green coffee is run through a steaming process to remove the solvent.

In the Swiss Water Decaf Method, the beans are held in a vat of water for up to 10 hours to extract the caffeine. Since the caffeine keeps the coffee from reaching equilibrium, the flavors stay in the bean and caffeine migrates to the water. Once the desired caffeine content is reached, the water passes through several filtration systems, removing the caffeine.

Supercritical carbon dioxide is the last process we will review. Green coffee is soaked in warm water and then moved into a compression tower. Carbon Dioxide, which we usually think of as a gas turns into a liquid when pressurized at 3500 PSIG ( a car tire is often 32 PSIG). While in the pressurized tank, the liquid CO2 bonds with the caffeine. It is removed when the tank is depressurized, turning the CO2 into a gas, leaving the caffeine in the water.

So, is decaf coffee bad for you?

No, decaf coffee is not bad for you. I do, however, have my preference when it comes to buying decaf coffee. After roasting and cupping all three methods, I always come back to the Swiss Water Decaf for flavor, body, finish, and sweetness.  That’s why all our Bald Guy Brew decaf coffees are made using this method

I love our decaf coffee and I’m sure you will too! The older I get, the more I like to have a good cup of decaf midday or after dinner. “Death before Decaf” is a clever phrase...but like my grandmother always said: “don’t judge a book by its cover”. Brewing coffee is the last step in the journey from crop to cup.  Done right, and it is rewarding.  Done poorly, and it is disappointing. Our goal in this ongoing series is to help you get it right so you can wake up to a great cup! Does your morning coffee ritual start with synthetic fertilizers or natural goodness? Organic coffee production results in cleaner beans, cleaner water, and healthier bio-systems.  More antioxidants and better flavor are just some of the added benefits when you drink organic coffee. Coffee certifications serve not only to help growers but inform consumers on the sustainable practices employed to help produce quality coffee.